Hi everyone,
Just wanted to thank you all from the depths of my heart for all your support here on my blog. I truly, truly appreciate it so much.😊😊
I miss you all, and hope to return to blogging in the New Year if my health conditions improve sufficiently.
I do so hope you are all safe and healthy, and am so looking forward to visiting you again as soon as I possibly can. I am back to hospital in January, so hopefully sometime after then!🙏
In the meantime...have a Magical Holiday and take care, dear friends xxxxxxx

An abandoned warehouse, beat deafening, coloured lights flashing,
her brain in overdrive.
Departing in her lycra gear, utterly bushed
from eight hours of non-stop raving. Outside
the street lamps are unsteady, dancing crazily.
The sidewalk rolls and ripples beneath her feet.
As usual, she throws up: curry, wine,
and a hash of cocktails slapped on the asphalt.
Why is she leaving alone again? Tears well up.
Tonight, she'd hoped, someone would be her rock.
In the taxi, inching through
the still busy streets of Chelsea,
a torrent of thoughts, mostly unwelcome.
Rebellion takes over.
This is her life!
Eighteen is an age for fun, not for hard work -
that can come later. Much later.
Her parents are wrong.
She is not accountant material.
It really is time she left home.
That place has become a tomb. Suffocating.
She is interred in it, feels like the living dead, yet
fear of the unknown seriously holds her back.
Such a dilemma! Hard boozing
has become her ally.
It delays the the inevitable, makes life easier to endure.
How she envies her brother,
a successful artist, living his life his way
with no strings attached -
in total freedom and with no pressure to prove himself.
How wonderful to be free of parental domination
and be left alone to make his own choices!
She, on the other hand, is made to feel beholden:
the dutiful daughter, expected to follow
in Daddy's footsteps - someone to proudly parade
before envious colleagues. His carbon copy.
But, this morning, there is change in the air.
Today, she will begin
the life she has always longed for.
Today, she will tell them exactly how she feels.
The taxi draws to a halt. The house is lit up
and she's aware they're waiting up. As usual!
Today, she won't accept the lecture with downcast eyes.
The alcohol in her blood empowering her,
she enters by the front door. Their faces
forewarn of what is to come.
She's been dominated by control freaks for too long.
Their eyes are flashing with anger. There is no consideration
for her wishes, her feelings. She observes
the hard faces, fuelled by one-upmanship...
for the last ever time.
Four more days of holiday, followed by two hospital appointments, then hopefully back to some semblance of normality!😉
Thank you so much for your patience...and your kind support 😊😊
Posted by Ygraine at 15:02 35 comments:

Yellow mustard fields.
The sun-baked earth
with it's mosaic cracks:
parched, barren, like
my thoughts - overheated.
Brain shorting out. Lazing
with the languor of the idle
below blue sky's great arc,
while white limbs turn red
then brown as last winter's leaf.
This could be idyllic, this choreless
Sunday: ice lollies in the freezer,
Chardonnay cooling in the fridge -
oh if only I weren't too lethargic
to move - only a lover could rouse my senses!
High above the Swifts reel,
their cries piercing. On unseen thermals,
a Red kite glides then steeply dives -
some poor unsuspecting rodent dies -
and I, heat mellowed, detached, simply observe.
Now increasingly dazed
as sunstroke threatens, cognition
like scrambled egg,
I drag myself from UV assault
and dive into ice cold pool.
Well, a girl can dream, can't she? 😉
I am taking a couple of weeks' much needed holiday, so will catch up with you all as soon as I possibly can. 😊
Have a great weekend guys  xxx
Posted by Ygraine at 10:46 46 comments: 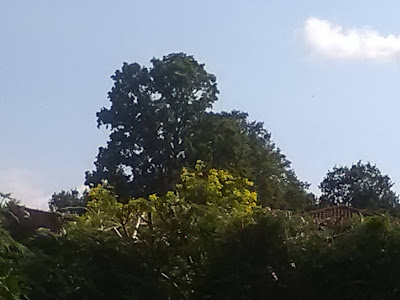 No path leads to the copse
where the Dryad sleeps.
It has all grown in.
He stands as if carved in stone
in the dappled and shifting shade
beneath His canopy of oak,
attired in ivy's profusion.
Through the dense greenery
odours of moist earth rise.
A snail leaves silver track
over aged roots that penetrate the earth.
I take a forbidden glance:
amid bark gnarled by time
and asymmetrical boughs,
He sleeps on, His form barely discernable
within sacred wood and green leaf.
The small brown nostrils inhale
as He sighs in His slumber,
aware of my presence.
I am the hope he dreams of.
His anguish has drawn me here
to defend His kind with my life.
I chain myself to the living trunk
and defy the screeching saw...

THE COURAGE OF THE PAIN-WRACKED

The courage of the pain-wracked, in spite of the onslaught!
The smile forced for others. A convincing mask.
There is agony behind it, and the dread it will never end,
and the frustration of helplessness, the hopelessness of it.
The anxiety cuts deep, silently crying out for help -
loaded, as it is, with hidden self-pity.
Self-pity? Imbecile! Who cares how much you hurt?!
A red hot sword journeying through the nerves:
Hell's Imp, playing in brain with nervous system,
prodding with pronged fork, a skilled torturer
inflicting agony upon the cursed Soul
with a glee that knows no bounds,
supremely skilled in his favourite sport.
The Imp is resolute, there is no anaesthetic.
He has been ignored too long, now his presence is felt.
So the suffering radiates, like a fearful nuclear fallout,
and there is only the primitive tongue to express
such depth of pain. But it hasn't the words,
it is inadequate. Should it be cut out?
And the futile sobbing. So ineffective.
Sustenance, too, is rendered impossible - is stored
in memory's archive with fellow outdated files,
while watching others tuck in. Starvation beckons.
It has become an obsession, food.
A substance more precious than diamonds.
But how about the eyes of the afflicted, the eyes?
Constantly dulled by the hidden curse
and often moist with tears. And the mirror -
that face in there is the face of a dead woman,
so drawn and pale with hollow cheeks,
a ghostly Seer, whose prophecies
bring such apprehension. A merciless judge
passing sentence upon the innocent:
a life sentence of neverending pain.
Courageous? No. I am scared...so scared.
My humblest apologies, dear friends, for taking so long to visit you all. I am currently awaiting a brain scan. In the meantime, I will visit you all as often as I possibly can. Thank you so, so much for all of your kind support😊
Been missing you all so much xxx
Posted by Ygraine at 11:53 44 comments:

I imagined I'd tracked you down
to one of those hellish concentration camps
in Hitler's nineteen-forties Germany. There,
in Nazi uniform, you stood observing
the mass genocide, your expression almost ecstatic.
Ice blue eyes, clear as the spring sky,
would perhaps meet mine. What then?
Would my blonde hair and pale complexion
save me from the inconceivable horror
inflicted upon my non Aryan contemporaries?
I'd assumed you'd be as brutal and inhumane
in real life too and therefore intensely disliked you.
So convincing you were up there on the screen
that I'd accepted as authentic a persona
well rehearsed - but then something else
in your eyes sent shivers of an altogether
different kind down my spine.
I'd inadvertently caught you unawares
before you'd had time to slip
into your chameleonic public image.
And the discovery was intoxicating:
a clean slate with your face on -
a smile so unexpectedly warm
that it took my breath away,
initiating an inexplicable infatuation.
Tell me, does it really matter
that I'm unknown to you, because
isn't absence claimed to be the heart's inspiration?
Observing your every role
has been the perfect antidote
to the isolation of life in lockdown,
vastly expanding my restricted world.
In the sleepless hours, I think of you
and search the darkness
for your face...😉

Trekking over Dartmoor
through air heavy, moisture laden;
passing stone farms, long abandoned, ruinous;
bleak hills, heather clad and darkening
within gathering mist that blurs
the boundary between reality and fiction;
our faces strangely luminous, like
those of ghosts - but somehow not.
Such transfiguring disturbs and hastens
the duo of adventurers onward
toward the great mystery, oft sought,
elusive and otherworldly - yet
simultaneously perceived
on hill top, on river bank;
recognisable only by the howling
other than that of dog or fox:
a blood-curdling, long drawn out cry
that spikes terror through the Soul.
Ominous panting nearby.
We break into a run. Padding footfalls follow.
Mist so dense now. Stumbling into rock,
now prickly gorse that plucks
at our clothing. Blood red eyes within
gigantic black dog shape
looms up out of the gloom.
Desperately trying to out run it,
pulses racing, fear all-consuming.
Hope fading, as it's relentless pursuit
drives us onto narrow path
between treacherous bog pools.
Gutteral howl closer now and we run
even faster, lungs almost bursting.
The path turning dark, liquifying
into black ink, flowing from Sir Arthur's pen
as it skims across the page,
defining our fate...
Mentally beseeching him to deliver us
from the frightful curse
of his dark imagination.
Only he can lift it.
Baskerville Hall appears before us.
But nearing means distancing
from all we've sought so long.
Pages flutter in sudden breeze.
The book closes.
Sunlight pierces the gloom.
Posted by Ygraine at 14:09 50 comments: 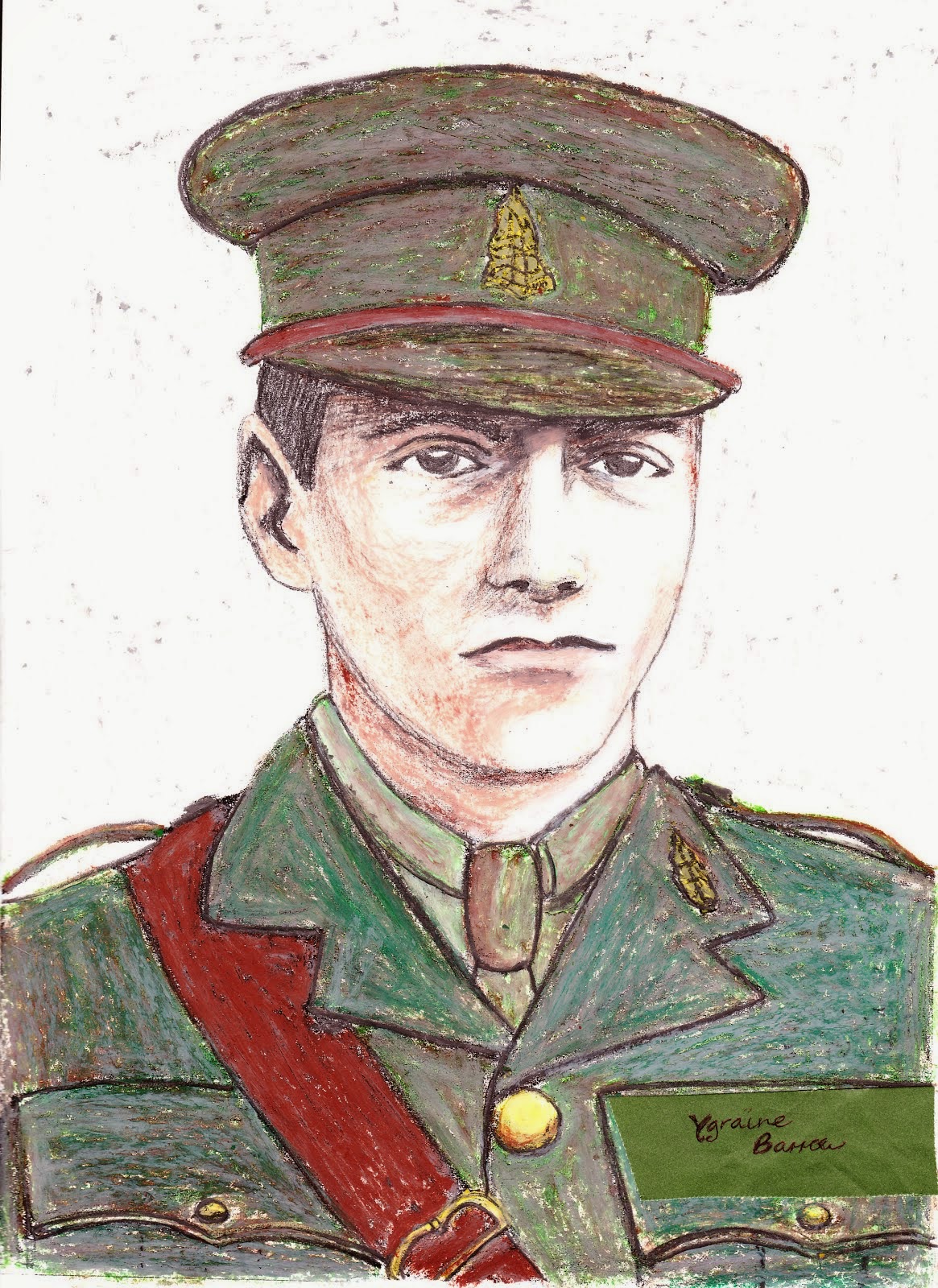